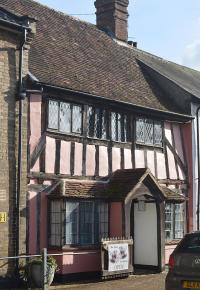 The Woolpit and District Museum is on the upper floor of this early 16th century cottage. The entrance is via the Woolpit Institute.

In the mid 1980s Woolpit History Group started field-walking throughout the parish. After several years three Roman sites and eight Medieval sites had been found and confirmed. In 1983 the Parish Council asked if it would be feasible to display the group’s findings and a store-room on the upper floor of the Woolpit Institute was made available. Thus the Woolpit and District Museum was begun. 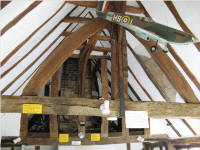 The roof trusses inside the museum

There are two permanent displays.

The first shows the famous Woolpit Brickworks presented as a 3D model of the site as it was in its later days, along with a collection of bricks, tiles, photos and various tools used in the trade. A booklet 'The History of Woolpit Brickworks' is available in the small shop.

The second is a reconstruction of a Victorian Kitchen with artefacts which might have been used in everyday life up to the 1920s. 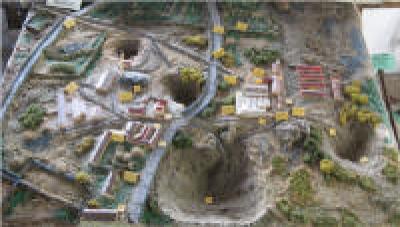 New for 2020/21 is a display about the artist Sybil Andrews who lived in Woolpit in the 1920s. Some of her work was inspired by the countryside of mid Suffolk, and themes incorporated in the banner she made depicting the martyrdom of St Edmund (now hanging in St Edmundsbury Cathedral), were sketched out on the walls of her little cottage. We are keeping the model of St Mary’s Church, new in 2019, as our centrepiece  but have extended the display to include information and pictures about the Woolpit Room Christian Fellowship in White Elm Road and the former Primitive Methodist Chapel in Heath Road. We have also extended our display of photographs of Woolpit as it looked circa 1900 to about 1930. It is interesting to make comparisons with the village today and see what has and what has not changed.

The Brickworks display and the Victorian kitchen, have been cleaned and refreshed, and we have created a new display about the Green Children as so many visitors are interested in this legend.

The original war memorial board is also now on permanent display and we have added some information about the extension made to it in 1948 to include the names of the six local men who lost their lives in WW2.

The Museum is reopening for the end of May Bank Holiday weekend, that is Saturday 29th, Sunday 30th and Monday 31st from 2pm to 4.30pm.

It will then be open from 2pm to 4.30pm every Saturday until the end of September.

Visits on Sundays and Bank Holidays for that period will also be possible but must be booked beforehand by emailing  museum@woolpit.org or by phoning 01359 244532.

There is a car park opposite the Church as well as on street parking and refreshments can be purchased in the village.

Contact museum@woolpit.org  We look forward to seeing you sometime.